The municipality of Norrköping owns Kopparholmarna, which since 2012 has been an esteemed nature reserve. 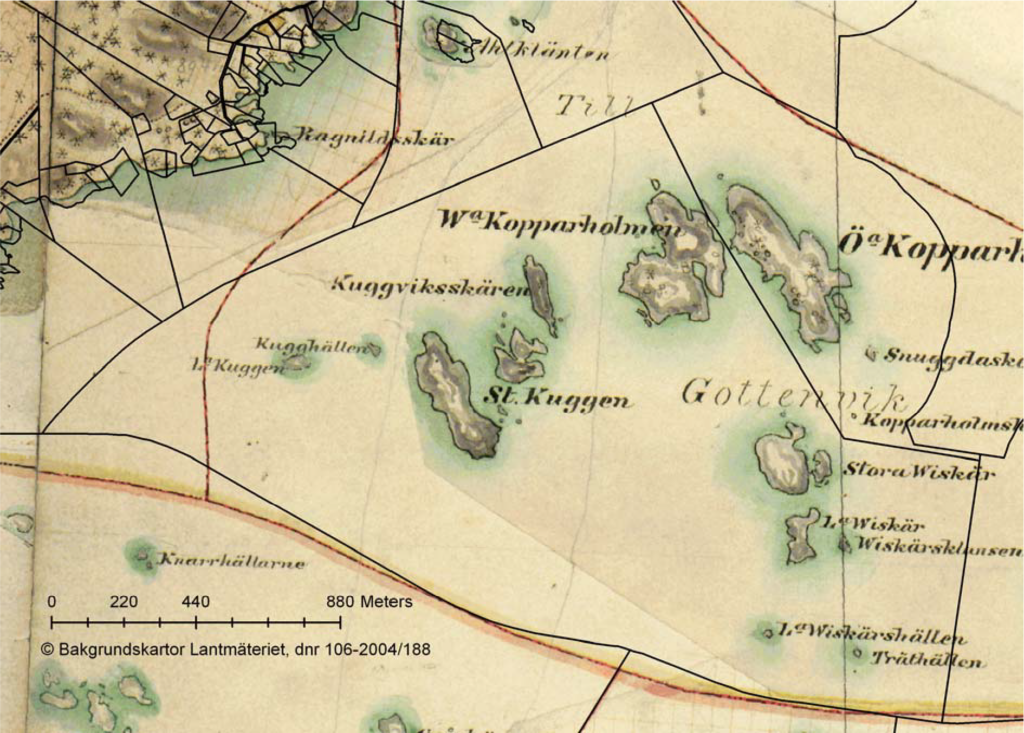 The names of the people of Kopparholm can be traced back to the 18th century. On Västra Kopparholmen, warp and stone chips have been found. This indicates that the islands’ then owner, Arvid Posse, was looking for copper ore on the islands. Hence the name Kopparholmarna.

In 1884, Kopparholmen got a gas oil boiler with a lens device of the 6th order with alternating white and red light. Together with the lighthouse on Svartöberget (Arkö), they got a single line over Aspöfjärden.

In 1909, land on Västra Kopparholmen for 20 years was leased to the Swedish Pilotage Agency. The land that was leased belonged to Gottenvik.

Anders Roback is to be buried on eastern Kopparholmmen. He died 1834-09-09 and was buried 1834-09-11. Anders Roback was unmarried and leased Köxemåla in Misterhult. He died on a hunt that was on its way from Stockholm to Figeholm. He was 32 years old and died of Cholera Morbus (Cholera).

From 1938, Kopparholmarna was owned by the Crown and a number of cannon defenses were erected. As recently as 1955, warning shots were fired from them at a Russian submarine. All fortifications on the islands are today demolished, but traces of several foundations can be seen. The islands were a military protected area until 2012, but are now part of a nature reserve of 330 hectares, of which about 30 hectares are land and the rest is the water area around the islands.

The archipelago line runs daily between Arkösund and Kopparholmarna (June 23 – August 29). At 09.30 the boat departs from Arkösund. The trip back to Arkösund departs at approximately 16.35 from the bridge on Kopparholmarna.

Here you can read more about the shipping company behind the Archipelago Line:
SKÄRGÅRDSKOMPANIET

Parking is available in Arkösund about 1000 m from the harbor.